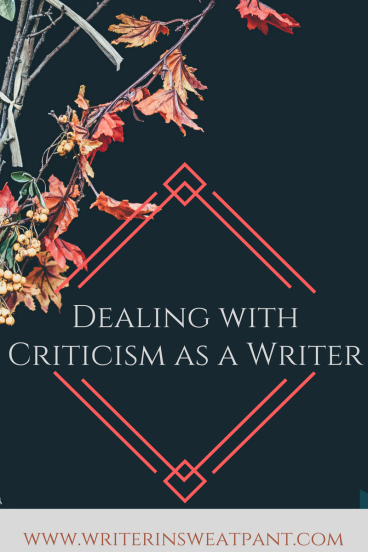 One of perhaps the hardest things for writers to overcome is the fear of facing criticism.

I hate to tell you, but it is inevitable.  Eventually, someone will not like your work.  It will hurt, but you want to know a secret?

Criticism is what makes you a better writer.

I have been fairly lucky when it comes to people reviewing my work, but there have been times where someone tells me they didn’t like a particular scene or that they think my work is too “young.” (I’m nineteen and published my first book, for better or worse, as fifteen.  I heard this OFTEN when I first started out.)

Now, I know that it doesn’t seem like that sort of comment should have bothered me, but at the time, it really hurt.  I was lucky enough to receive mostly favorable reviews, but it didn’t matter.  One negative comment would have annoyed me no matter how many five stars I received.

Looking back, it all seems a little silly, but I know every writer hits a point like this when one negative piece of feedback just seems to be ripping your heart open.  Your book is your baby.  You don’t want to hear how you or it failed.

Negative feedback isn’t a sign of failure if you use the information to make your future writing better. Actually, you should LOOK for the critics.  Without criticism, how do you expect to find the weak points in your writing and make it better?

However, I believe there are three different types of criticism, and only one of them is the healthy kind that builds you up as a writer.  The other two you need to ignore because they will only tear you down.

As my dad said once to me, this kind of criticism comes from keyboard bullies.  They are the ones that post in the comment section of blogs not with helpful information, but rather a bunch of nonsense that angers more people than it helps.  This kind of criticism exists to annoy you.  It’s rarely true and is just as the name I gave it suggests: spam.  Flat out ignore it.

Stepping back and questioning the integrity and quality of your writing is a healthy practice.  You are your best critic, but likewise your worst.  It’s sometimes hard to distinguish between taking a good look at your writing and judging yourself on things that don’t matter.  Self-criticism can quickly morph into self-doubt, and while it’s normal to have a little self-doubt, it’s not normal to get yourself in a panic over things that are out of your control.  I am quite familiar with the fine line between the two, and even after two self-published novels and a third one soon to come I still have to evaluate almost every day whether I’m dealing with self-criticism or it’s deadly twin, self-doubt.

You might remember this term from when you wrote papers in school and your teacher scribbled “helpful” revision comments in the margins before giving it back to you.  Then, if you were at all like me, you remember those comments as a pain and another long night of homework.

I hate to tell you, you still need constructive criticism now.  Occasionally having an unbiased person review your work and give useful feedback is important for a writer.  This is healthy and the only kind of criticism you really need to focus on.

So, next time you receive feedback, remember that whoever said it is actually helping you.  Don’t go after them and demand to know how they could say something bad about your work.  Instead, ask them to explain what they meant and even see if they have anything else to say to help you improve your work.

Wow.  As I read back down through this post, I’m starting to remind myself of one of my previous teachers.  That teacher used to preach about constructive criticism, but I always hated it.  Funny how viewpoints change.

Before I get weirded out by that thought, I’m going to leave you with this post.

As always, hope this helps!  Feel free to leave a comment or question below.