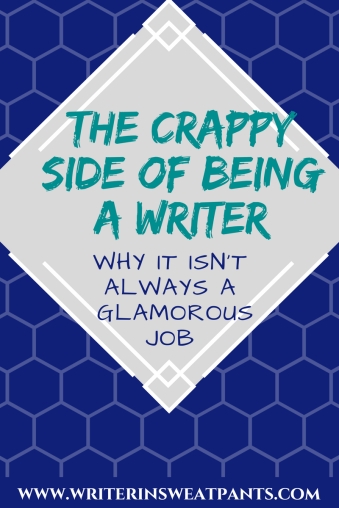 There are many perks of writing, but sometimes it’s not all it’s cracked up to be. So many people point out that writers set their schedules, create worlds, and encompass the emotions of the world through their pen (or laptop).

It’s all true! However, like any job, there are crappy bits too. Instead of glamorizing writing (albeit it is an awesome job most of the time), I thought I’d make a list of the negative side of an author’s world. If you’re interested, I also have a board on Pinterest for all the fears writers face (because they are part of the bad bits of the job).

Doubt caused by comparison is perhaps the main killer of a writer’s hopes and dreams. No matter how hard we work, how many followers we have, or how many copies we sell, there will always be a book better than ours. There will be writers who hit the NYT bestsellers list overnight, while you have probably never hit it though you’ve written many books.

It took years for me to stop comparing myself and my books to successful authors. Admittedly, I still fall into this trap on occasion, but it doesn’t do me any good. Some of my doubt was erased over this past year when I realized I’d become one of the writers I used to be jealous of. I don’t have thousands of followers, and I’ve never hit a bestsellers list, but I have a small, loyal following, numerous social media accounts, an ever-growing blog, and three self-published novels.

Five years ago, I had none of that.

So the next time the “comparison lie” tries to pull you into its trap, just remind yourself how far you’ve come. Even a new writer who has half a manuscript and no following is better off that an aspiring writer who’s never written a word.

2.  CREATIVE IDEAS AT ALL HOURS

You’re not a writer until an idea comes to you at the worst possible moment.

Maybe your story idea pops into your head while sitting on the toilet, or in the supermarket, or during the middle of a boring conversation you wish you could get out of. Also, it’s almost always when you don’t have a pen and notebook, or other note-taking materials, handy.

While these euphoric moments of creativity are great, they can be an irritation at four a.m. when you want nothing more than to sleep but your characters won’t shut up.

3. EXTREMELY TIME-CONSUMING: FORGET ABOUT BECOMING THE NEXT OVERNIGHT SUCCESS

You’re not going to be an overnight success, meaning you have to be in it for the long haul. You will spend weeks, months, maybe even years writing. Eventually, you’ll begin to doubt yourself and probably start to fall into the comparison lie.

4. YOUR WORK WILL ALWAYS BE JUDGED

There will always be a critic in the crowd no matter how great a writer you become (or maybe already are). If you can’t stand a one-star review, this isn’t the job for you.

You can be an author with one book, but to make a career of it as well as a decent income, you’ll need multiple books. That means more time invested in a job that you might never make it “successful” in.

6. YOUR SALARY AND WORK BENEFITS WILL ALWAYS SUCK

High paying salary? In your dreams.

Insurance? Get used to writing even when you’re sick.

Writers are basically overworked, underpaid, and always stressed about something (typically that they can’t write out their ideas fast enough).

7. YOU’LL ALWAYS WORRY ABOUT WHERE THE NEXT IDEA WILL COME FROM

You will always look for more ideas, even if it doesn’t make sense because you’ve already got more ideas that you could ever write books for in a lifetime.

8. YOU WILL SPEND MUCH OF YOUR TIME DISCOURAGED

Especially after rereading a first draft. You’ll doubt whether you ever had the gift of writing at that point.

9. YOU MAY GET LONELY

Writing is a solitary career unless you intentionally find likeminded individuals for company. Find fellow authors and readers to hang out with, even if you’re an extreme introvert like me.

10. YOU’LL HAVE TO LEARN DOZENS OF NEW SKILLS

When you begin a career in writing, you don’t just sign up to be an author. Of course, if you traditionally publish, you’ll have a team to help you. Even then, you’ll need to be familiar with marketing techniques, social media, blogging (or at least interacting with them), editing, formatting, genres and keywords, and many, many more things on top of actually writing your story.

Don’t forget: you also have to be skilled like your characters (or at least use Google for research). Are they carpenters? Might want to brush up on the subject or get a little hands on. A golfer? Might want to play a game. A unicorn who is gifted as the best swordsman/women in the realm?

Okay, I leave the last one for you to figure out how to research. 🙂

So, before you think the world of a writer is all “write a book and make money,” just remember the list above.

As always, hope this helps.