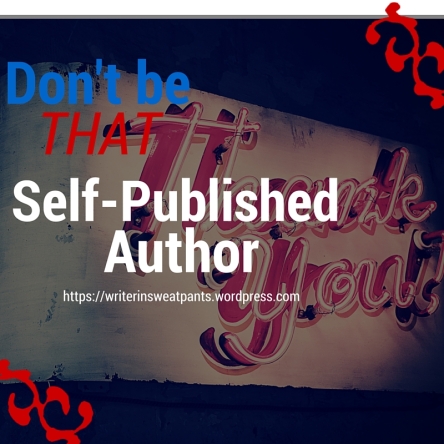 This seems like a topic that would be obvious, but I see it too often:  some self-published authors act completely unprofessional.  When they receive criticism, like a bad review, they go to the reviewer’s blog and leave nasty comments on posts.  They get irritated when someone says their book cover sucks.  They believe their failing or nonexistent sales are due to bad readers, not a bad writer.

What?  Did you enjoy throwing a tantrum like a two year old who wants her crackers/nap/etc?

My advice: grow up.  This isn’t an industry for the faint of heart.  If you are only writing books to make money, stop now.  Your readers will thank you in advance and so will the bloggers/reviewers/writers you piss off along the way.

By acting unprofessional, you mess it up for everyone else who may actually be a decent author but won’t be reviewed by a particular blogger because they had a horrible experience with self-published authors who won’t accept criticism (I had a blogger say something similar to this to me once because of another indie author’s inappropriate comments.)

If you are, or aren’t, one of those authors I realize criticism hurts.  When I first published it really stung when someone criticized my writing.  I still cringe to think of getting a bad review.  But, failure or mistakes are normal.  My mistakes (which are many in the writing world) taught me the most valuable lessons I had to learn and they will you too.  If your book receives harsh criticism: eat some chocolate/comfort food of choice, cry, learn, and move on.  Don’t obsess because that is the worst mistake of all.

If you really need help coping with criticism:

If someone criticizes your writing, say thank you for the review anyway.  It was one person’s opinion, not a personal attack against you.

Even writers like Cassandra Clare and Stephen King get bad reviews or deal with criticism.  Not that it probably makes them happy either, but it is part of life.  Take the advice, think about it, and consider if the reviewer isn’t right.  However, people do get touchy (especially nerdy fans who hate you killed their favorite character *coughs to cover guilt*), so please feel free to take negative comments with a pinch of salt.